Tonbridge and Malling Borough Council has published its next stage consultation (called 'The Way Forward') of its Local Plan 2011-2031 on Friday 30th September 2016.

It proposes two very large new developments of about 1,000 houses each shown in ORANGE on the map below.

One lies on the edge of Kings Hill spreading into the southern fields of Broadwater Farm, heading toward both East & West Malling and the second covers the eastern end of East Malling Research Station from Kiln Barn Lane to Hermitage Lane and beyond to near the 20/20 roundabout.

In West Malling, the Manor Farm field between Churchfields and Offham Road is proposed for up to 80 houses.

In Larkfield, Kent County Council has placed Martin Square Library on the map for disposal. It does not say what the plans for the Library might be if the site was built on. Although not part of the Local Plan, we are expecting the Planning Application for Aylesford Newsprint Larkfield site soon. We expect a few hundred houses to be proposed there. We understand the rest of the site would still provide more jobs than the highly mechanised paper mills did. Any houses on this brownfield site would mean fewer were needed elsewhere, like on Broadwater Farm.

Tonbridge & Malling Borough Council are consulting on extending the Green Belt but only to West Malling by pass, shown in pink on the map below.

We think this is not enough to protect the open countryside between Kings Hill, West Malling, East Malling and Larkfield and keep these villages separate.

WE WANT YOUR VIEWS ON WHERE THE EDGE OF THE GREEN BELT SHOULD BE. Click here, to fill out the survey. 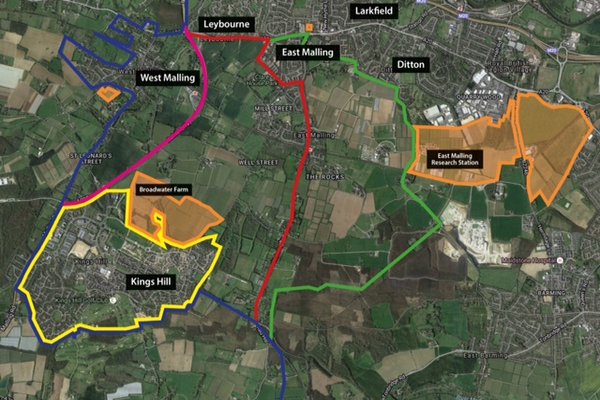